Laughs, eye rolls, chanting and protesting. Those are just some of the things village residents did during a recent public hearing that the Village of New Hyde Park held in regards to a potential four-story apartment complex and retail building that might be built near the Long Island Rail Road on South 12th Street in the near future.

“Independent of the application, the village board previously announced its intention to redevelop the industrial district along the Long Island Rail Road into a vibrant new pedestrian-friendly community hub for our village,” said Mayor Lawrence Montreuil at the start of the hearing. “We referred to the project as Station Plaza. The vision is to create a new Main Street for the Village of New Hyde Park.”

The one who can help the village make Station Plaza a reality is Huntington Station resident Ernesto Tersigni, who owns 300 South 12th LLC and the half-acre lot. Tersigni wants to develop the mixed-use building that will potentially have 4,916-square-feet of retail space on the first floor and 71 apartment units, as well as two levels of underground parking. The main demographics for the proposed building are young professionals and empty nesters. Additionally, 10 percent of those units will be affordable housing as per village code.

“The breakdown of the apartments are 53 one-bedroom units and 18 two-bedroom units, ranging in size from 630-square-feet to 1,068-square feet,” said Tersigni’s attorney Andrea Tsoukalas Curto. “The building will also offer amenities to its residents, such as a fitness center, an open air courtyard with seating and lounge areas and a rooftop.”

The proposed building will be designed with an Alexandria Colonial façade to provide aesthetic appeal. The estimated cost for the façade is $890,000. The building will be located at the southeast corner of Third Avenue and South 12th Street, with frontage at South 12th Street, Third Avenue and Baer Place. Currently, the area that Terisgni wants to develop has a one-story brick building that contains vacant industrial space, a one-story brick building that was previously used for retail space and a two-story single family residence. 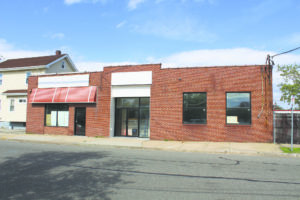 “The site is a prime location for transit-orientated development because of its proximity to the Long Island Rail Road, which is directly adjacent to the site,” explained Curto. “Transit-orientated development has been utilized for the past two decades to revitalize downtown areas on Long Island. One benefit for this development is less traffic congestion by encouraging mass transit. The idea is to create a walkable pedestrian friendly neighborhood.”

Outside village hall, tensions grew when some residents started chanting outside.

“I heard that it’s a $5 million payment off to somebody,” said resident Sean O’Connor. “I want to know who’s getting paid.”

Back inside, Curto mentioned that village code section 195-3.2 authorizes the village board to grant development incentive bonuses to properties in the village’s overlay district, which this new development falls under. 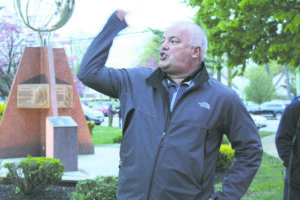 “The applicant seeks incentive bonuses for the proposed use, the height of the proposed building, the required parking and parking dimensions,” said Curto. “…The applicant has offered a payment in lieu in the amount of $355,000, which is $5,000 per unit, to be paid towards the village’s industrial development fund, which provides benefits to the community. The total value of all the amenities offered by the applicant is $1,136,000.”

Curto gave the board some background information on Tersigni, who builds reinforced concrete high-rise buildings in Brooklyn, Queens and Manhattan, prompting some residents to yell “We don’t live in Queens.”

The village board will reserve its decision at a later time to see whether or not they will approve the building and will have more information sessions for residents to attend.