Sempre Fame, an up-and-coming barbecue restaurant in Floral Park, is providing more to the community than just its signature smoked cuisine. Owner John Cavallo has partnered with various local charities and organizations in an effort to give back to the community.

“We were given the ability to cook and cater,” said Cavallo, “So why not use that gift to benefit those who are not as fortunate.”

Cavallo and his brother specialize in on-premise catering events in which they bring a barbecue restaurant right to your backyard or party venue. After three years in the catering business, the brothers opened their storefront on Tulip Avenue in order to accommodate their growing clientele.

Since its inception, Cavallo has used his business as means to give back to numerous charities and organizations in the community.

“If you have ever volunteered, you know the feeling that it gives you,” Cavallo said. “Also, one day I may need help and someone I helped may be able to return the favor.”

One of the groups that Cavallo most regularly works with is the ACDS, an organization that serves children and adults with down syndrome, autism and other developmental disabilities. In March, Cavallo had groups come in from the ACDS facility and take over the dining section of the restaurant for a few hours, providing them with entertainment, and of course, some good barbecue cooking. Cavallo has been involved with the organization for several years since meeting a member of the group while supply shopping for the store.

“I saw some group members shopping for drinks and items for their day program and offered to come and host a barbecue for them,” Cavallo said. “I gave them my business card and they took me up on the offer.”

Cavallo has been organizing events with the ACDS since then and has formed a positive relationship with the organization. He and the Sempre Fame staff enjoy working with the ACDS and participating with them in decorating the store, drawing, singing, dancing and, most importantly, eating during their visits to the store. 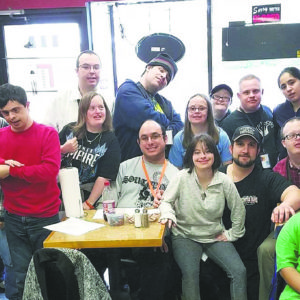 “We host two events each year with the ACDS,” Cavallo said. “In the summer we host a barbeque for them at their headquarters in Plainview. We also invite the group to our restaurant so they can spend some time with us outside of their facility and get a change of pace.”

Aside from the ACDS, Cavallo also works with and donates to several other organizations including the Hance Family Foundation, the Ronald McDonald House, local little lague teams and schools, Liz’s Day for breast cancer awareness, the Cub Scouts and the Sandy Grounds Project.

“On May 20, we will be selling pulled pork sandwiches to benefit the Hance Family Foundation in honor of Emma, Alyson and Katie Hance,” said Cavallo. “Also, we do a toy drive and feed the families at the Ronald McDonald House at Christmas time.”

For more information about Sempre Fame or any of the charity events that they are involved in, visit www.semprefame.com or speak to Cavallo directly at 516-488-7900.