Summer is in full throttle so roll your windows down because the boys of the summer are in your town. New York Baseball Academy (NYBA) is back in action for their 41st year. NYBA, a renowned baseball camp for players ages 7 through 15, is ranked as one of the top five baseball schools by Baseball America here on Long Island at Hofstra University. The academy is orchestrated by notable men in baseball today.

Terry Ryan, Hofstra summer camp director has teamed up with NYBA director Bob Hirschfield and John Russo. Hirschfield was a part of St. John University’s 1968 College World Series team, is longtime NYIT head coach and was inducted in the NYIT hall of fame. Russo, who serves as the NYBA assistant director, is a University of West Alabama student-athlete alumni and currently head coach of Hofstra’s Division I baseball team. So it is a no-brainer why the NYBA has deemed success over the years. 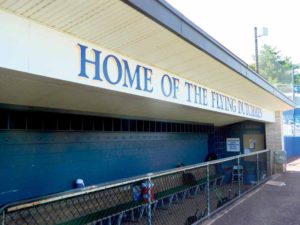 NYBA is a six-week program that ran Monday through Friday from July 5 to Aug. 12. The academy welcomed new and familiar faces each week. One of Russo’s favorite parts is how much players enjoy NYBA and keep coming back.

“NYBA was a huge asset to bring to the Hofstra baseball community…we’re bringing over 1,300 kids to Hofstra’s campus every summer getting to show our beautiful campus, facilities, coaches and it has had nothing but positive influence since the day it’s been here,” he said.

Players take advantage of Hofstra’s state of the art facilities each day, whether they are on the varsity baseball diamond, sports bubble or large amount of fields. 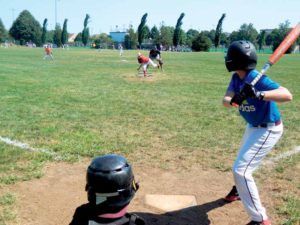 “The infrastructure we have here can’t be duplicated anywhere else,” said Ryan. “The grounds here at Hofstra usually are far superior than most other colleges.”

Hirschfield and Russo’s passion, knowledge and motivation in baseball makes an impact on their staff, and the ripple effect on the academy is profound. The dynamic combination of Hirschfield’s 40-year veteran staff and Russo’s Division I staff is a recipe for greatness.

“When we combined both of them it made the quality of the product even that much better,” said Ryan.

Overall, NYBA’s baseball-intelligent staff infers that the instruction being provided is instruction worth engagement. In his experience, Russo has instructed both children and adults.

“Young kids, they’re fresh, they want to learn and that is the beauty of this camp,” he said.
NYBA pride themselves on teaching the fundamentals. Every day, players are doing drills; bunting, hitting, pitching and fielding. Baseball is a game built off of fundamentals and in 2016, fundamentals is a part of the game that is being lost, but not here. Both Hirschfield and Russo agree on how important it is to teach the fundamentals.

“What a lot of times is neglected is the instruction to be a general athlete,” said Hirschfield. “Kids today are playing 30-50 games, but they don’t practice enough.”

The academy fills this void by allowing young players to be put in a practice format.
“Here, we try to have a structured playground, while they’re constantly playing and working at their skills,” added Hirschfield.

NYBA orchestrates their academy to cater to the individual’s ambition. Each day, the players play live games, but also dedicate time to learn more about their primary position. This time is called “specials,” which are instructed by staff members whether it be a former major league player, college or high school coach.

“It is teaching the fundamentals. They get pitching specials, infield specials, outfield specials…that is why the NYBA held its course for 40 years; it is the best teaching camp you can possibly find,” said Russo.

The NYBA serves as a motivation and is a place to have fun and learn, just ask Brian Brady, former right fielder in Major League Baseball to a more recent NYBA winter clinic, Steven Matz, pitcher for the New York Mets. If a player is willing to put in the hard work and effort, it is clear to see that the New York Baseball Academy can help create a path to baseball stardom.